There is definitely something in the air in Goa! For some time now, our tiny little state has been attracting the best and brightest creative people from around the world to its shores. At the moment, the internationally recognized musician Tritha Sinha, who has been travelling between France and India for the last 18 years, has made it her home and set up her studio here.

If you see a woman wearing a saree and rocking an electric guitar on stage in performance in Goa or spinning electronic music with Indian classical vocals mixed in, you know it’s Tritha aka DJ Pagli!

Invited to perform at the Cannes film festival 2019 in France for her award-winning film score, Voyage for Change, Tritha is a vocalist, composer and music producer based out of India and Europe. Immersed in the Indian classical music tradition for more than 25 years, she trained in the Agra and Patiala gharana and then the Bishnupur gharana under Pandit Santanu Bandhopadhyay from whom she learned Khayal. She went on to deepen her understanding of breath and the connection between sound and the body in the 12th-century Dhrupad style with the Padmashri Gundecha brothers. This led to an interest in healing and music therapy and Tritha has been teaching and conducting workshops on these for the last ten years. She also makes albums to share the healing vibrations of music and sound secrets with the world.

“I want to spread good vibrations through music. If people are happy, we will have a more harmonious planet/earth to live on,” says the hugely talented musician.

With her strong background in the classical tradition, Tritha embarked on a journey into another world of music entirely. Her debut studio album ‘PaGLI’ was released on Sony Music in 2014, where she earned her license to break the rules, unlearn and re-interpret what she had learnt in her classical training. Her next album ‘Raagas in Paris’, released in 2016 under the Silk Road label where she explored Indian classical with psychedelic rock, and performed with her Indo-French rock band Tritha Electric, comprising her, Paul and Mathias. Soon after, in the same year, she released her next album, ‘Elements d’Existence’ with Martin Dubois based on sound healing and the 5 elements. This summer, she released her path-breaking album ‘Pachamama – A Tribute to Mother Earth’ on July 3rd, 2021, International Plastic Bag Free World Day.

Attuned to Mother Earth and nature, Tritha’s music holds strong notes of activism. She co-founded SPACE (Stop Patriarchy and Choose Equality), a women artist collective based in New Delhi with her partner Ritika Singh that creates music to provoke dialogue about gender justice.

Representing India in over 18 countries and performed at more than 300 concerts, Tritha has also been featured on BBC, Arte and Canal+ as a music activist and sound healer. Magnum Photos from France featured her as one of the 100 Women Changing India. She was awarded by the US State Department through the residency Onebeat 2016 as a cultural ambassador using music for social change and community development.  Her original songs carry social messages with themes of women empowerment, corruption in the world and awakening a much needed consciousness for Mother Earth or as she says, her songs are “about what I feel about society as an Indian woman.” She has also worked with global personalities like dancer Mallika Sarabhai, percussionist Sivamani, director Muzaffar Ali and Eve Ensler, author of ‘Vagina Monologues’. Tritha’s workshops on using music and sound for healing and aligning the human body, mind and heart causing deep and positive transformation of the soul are gaining a huge following. She has organised successful holistic festivals such as Divine Union in Mojigao, Goa inviting 30 healers, inspiring speakers and conscious musicians, to join her in doing her bit to change the world through music.

With so much going on there is lots to look forward to from this poster girl for a bridge between the East and West. She is currently experimenting on looping and relooping music cocooned in her studio in Goa, almost inventing a new genre. For her, “the truest way to express soul connection is really through music.” We end our conversation on an inspiring note as Tritha says of her time spent collaborating with musicians from the West, “We taught each other equal dialogue. When we listened to each other, harmony started happening. We should all listen to each other more – men and women, performers, artistes and communion and harmony will happen.”

Support this amazing independent artiste by listening to her music on her website www.tritha.com or on Amazon/Spotify.

IFFI 52 closes, raising a toast to the never-ending ...
Veerangana: The story of valour and courage of women protecting women
North Goa, witnessed a scintillating Cocktail Sundowner at MEXICOLA, Anjuna
Spreading Christmas Cheer at  The St. Regis Goa Resort
Mopa Airport to start operations on the first week of January!
Verma D'mello (Fashion designer) shares the best activities to do in Goa
Life of a middle class Indian is a comedy; it inspires my characters: Manoj Bajpayee at IFFI In-Conv...
Do your office work at the beach in Goa!
Life In The Sunshine State Of Goa Post The Pandemic
30+ Must Visit Places in Goa
The Heritage monument - Cojuem Fort - will be getting a cool new feature!
Top 5 Partying Venues
Mango among ‘mango people’ - -The king of fruits in the sunshine state of Goa
Campo Manor Luxury Villa - Best Kept Secret
Art Chamber
Have you heard of this phenomenon in Goa?
QMIN is now at Ginger Goa, Panaji!
Paperless ticketing on four trains!
Indigo Airlines will have more than 100 flights at Goa's New Airport
Cooking up Stories
‘Koozhangal’ delineates sufferings of ...
Goa to have cola from nutmeg apple!
A Unique Urak Bar Crawl
Top 5 Asian Restaurants in Goa
Goa Heritage Festival to make a comeback this November
Boomba Ride seeks to show society the ... Read more
Travel is Therapy
What made Omer Haidar (MD - Showhouse Event Management Pvt. Ltd) settle in Goa?
Beach Wear for the Goan Summer
amã STAYS & TRAILS VILLA SIOLIM, GOA BAGS VILLA OF THE YEAR AWARD
Goa's first charter flight may arrive in October!
Kokum Juice: the humble Goan summer drink
'Kalkokkho' is a portrayal of human...
The Houses Of Goa Museum
Goa’s new Mopa Airport successfully completed its first trial flight!
A new six-lane highway will come to Porvorim!
Boho Cafes of Goa
Work at a beach in Goa!
Stay Hydrated This Summer
Why has Bondla sanctuary become a tourist hotspot?
Line-up of Films for ICFT-UNESCO Gandhi Medal
Universal footpath to solve Panaji's floods?
When Pomegranates Howl - Film Review (IFFI 2021)
Is Day 6 of Iffi still interesting?
GO GRAND - NYE Gala Dinner and Theatre Show at Grand Hyatt Goa
GIN-I-US  GOA
As the fire slowly burns…
10 Must Do Watersport activities in Goa (2022)
IHCL, Goa Heralds The Holiday Season With A Greater Purpose
Flight ticket prices to Goa have risen sharply for the Diwali weekend 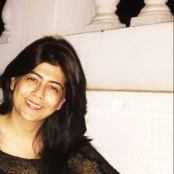 Author: By Samira Sheth
Art collector & Curator Samira Sheth loves to explore what is new and exciting in food and art and particularly enjoys celebrating all things Goa.